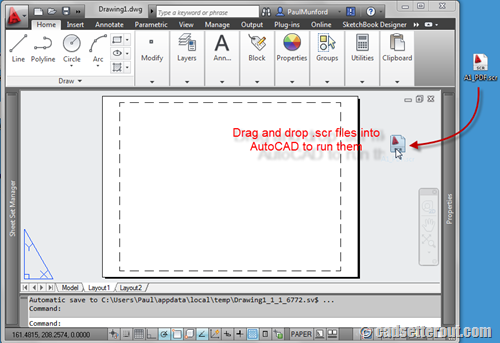 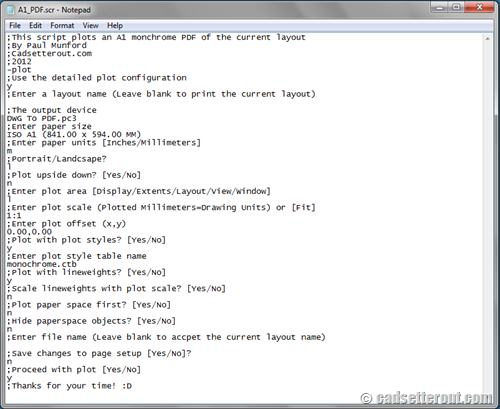 Hi Paul Munford,
Maybe you have something to share about following:
“you can run scripts on a whole batch of drawings using a windows .bat file”
maybe some examples?

I have been using Scripts since 2005 and am able to remember them better than AutoLISP. As such, I occasionally have an AutoLISP command pop into my head, and have to figure out how to write it as a script. As such, I have created 20+ script routines for work and have now had a new concept pop into my head and I would like to figure out this one too. I like the new commands DIMLAYER and XREFLAYER, and find them to be extremely handy. I am now working on setting up a INSERTLAYER, but I want to set it up with three different titles so that the company I work for can bring in blocks from three different areas. If I can figure out how to do this, it will save about 15-20 minutes per day, per job (our company did 150+ jobs last year). So far, I have figure out how to open Windows Explorer to a different drive, I just haven’t figure out how to open a particular folder on that drive.

Hi Paul,
Thanks a lot for these two posts about scripts and macros. I used to use lisps on an old version of Autocad. Now, I’m using LT and the lisps are useless. Am i wrong or scripts and macros can only use commands and options offered at the command line and therefore cannot really replace lisps? Is there a way to apply lisps to LT? Thanks again for your help. Best.
Thomas

You are correct. Scripts and macros are limited to AutoCAD native commands only. AutoCAD LT doesn’t support customization with AutoLISP, add-ons, and APIs. If you want to use AutoLISP, then you need to use AutoCAD.

At the end of script, how to close the program dwg trueview? Which one command to use? “_Close” not function. Thanks.

Hey! Ƭhis is my fіrst commеnt here so I just wanted to give a quick shout out and
tell you I genuinely enjoy reading your ƅlog posts.
Сan you suggеst any otheг blogs/websites/forums that
deal with the same topics? Many thanks!

sir, Ineed to plot some points all at a go , in autocad 15 . The coordinates ( x, y, z) of the points along with elevation are in csv file. What I need is to plot the points with ID and elevation (z) displayed. I could manage some how to plot points from csv file but id and z values could not be displayed

Hi guys,
Looking for a script file for cleaning the architects background. It includes changing text style, delete the hatches and layer colour to cyan. Could some one please give me some suggestions how to write a script for it.
regards
mathew

Post your results on the AutoCAD Forums if you are having trouble, and remember to post a link here so that we can come over and help!

I Friends, I want one program that satisfy below Conditions.

1. In Rectangle Some lines are there , i will select that rectangle and i will give offset command and some offset distance 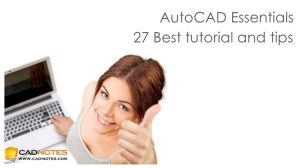 This compilation list 27 tutorials, tips and trick that CADnotes published in the last 8 years. A great place to start if you want to learn advanced features or learn new cool tricks! And it’s free!