We covered about acaddoc.lsp in AutoLISP tutorial. Acaddoc.lsp will execute commands defined in it, every time AutoCAD open a file.

What can we do with acaddoc.lsp?

Now if you know you can run commands automatically when you open a file, what would you do?

In this article, we are going to focus to the last one. I found that there are many users confused why their AutoCAD doesn’t work as usual. And they become regular questions. These are some samples of changed system variables.

These are several common system variables that change regularly.

There is a debate why they changed. Most people think that it was because routines in AutoLISP or other 3rd party applications. I used to be agree with it, until I saw this problem also happens in AutoCAD LT. So it remains a mystery to me.

We can force to set the variables in acaddoc.lsp

Harold Reuvers reminds me that we can set those variables in acaddoc.lsp. I prefer to backup my system variables and restore them when I have problem. We can’t remember all the variables, right?

However, if you have specific system variable that changes often, this is a good solution.

All you need is to create an acaddoc.lsp using notepad or visual LISP editor.

Feel free to add more lines or change system variables and values as you preferred.

If you want to learn how to use Visual LISP editor, see this basic AutoLISP tutorial.

What system variables do you find change often?

Do you find system variables in your AutoCAD change often? What are they? 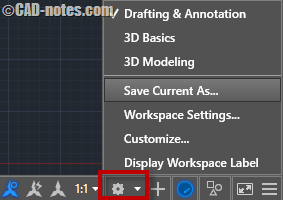 Do you know that AutoCAD 2015 doesn’t have classic workspace? Don’t worry, you still can create it and use toolbar. Read how to create it here.

This website uses cookies to improve your experience while you navigate through the website. Out of these, the cookies that are categorized as necessary are stored on your browser as they are essential for the working of basic functionalities of the website. We also use third-party cookies that help us analyze and understand how you use this website. These cookies will be stored in your browser only with your consent. You also have the option to opt-out of these cookies. But opting out of some of these cookies may affect your browsing experience.
Necessary Always Enabled
Necessary cookies are absolutely essential for the website to function properly. This category only includes cookies that ensures basic functionalities and security features of the website. These cookies do not store any personal information.
Non-necessary
Any cookies that may not be particularly necessary for the website to function and is used specifically to collect user personal data via analytics, ads, other embedded contents are termed as non-necessary cookies. It is mandatory to procure user consent prior to running these cookies on your website.
SAVE & ACCEPT
wpDiscuz
1
0
Would love your thoughts, please comment.x
()
x
| Reply