You are here: Home / AutoCAD / How to: Update AutoCAD Block in Multiple Files using Script

In this article, we will cover how you can use an AutoCAD script and run it with ScriptPro. We covered ScriptPro before; it might be better if you read it first.

Before we start, we need to create the block in a separate file. You need to explode the block, then save it as an external file with WBLOCK command.

Save it with the same name as the block. If you want to update block named “title”, then save it as title.dwg.

Save the file in a folder. In this article, we use D:\Data as the example. It’s important to use a specific folder for this purpose and not mixing it with other files. Because we will add this folder in Working Support File Search Path. 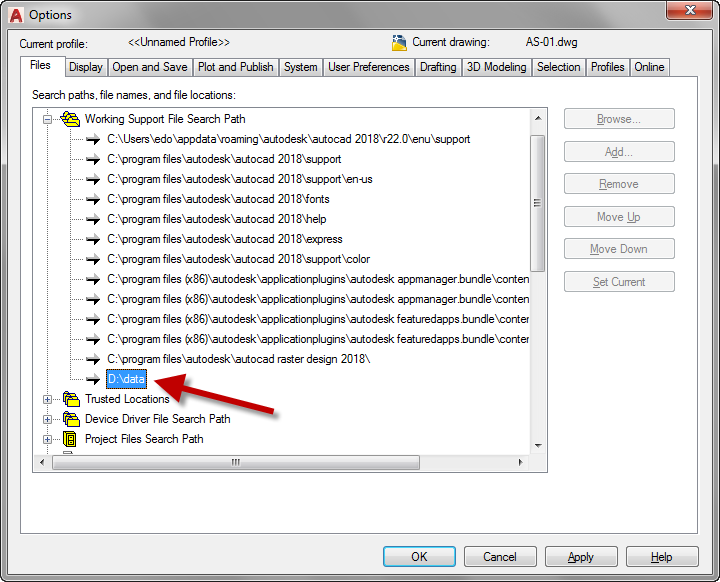 Updating a block definition is simple. We insert a block with the same name, and AutoCAD will update the definition after we confirm it.

Type the command in the notepad and save the file as “blockupdate.scr”.

Include the double quote to force Windows saving it in the .scr file extension.

If you use AutoCAD LT

AutoCAD LT can’t execute AutoLISP command. Therefore you can’t use (COMMAND \E) to simulate the Esc key. So you can just add the block and erase it immediately after you place it.

You can use this script as an alternative.

The script will place the block at 0,0,0 with scale 1, rotation 0. Then erase the last object created.

A new line in the script is the same as pressing Enter key once. That’s why we add an empty line after Last. We need to press Enter twice.

After you created the script, it is important to try it first. Make sure it works before you run it on dozens of drawings.  Check the command line after you execute the script and see if there’s something wrong.

I tried this script on AutoCAD 2018 and AutoCAD LT 2018. You might see different behavior in a different version.

Running the Script with ScriptPro

After you are sure the script is running as expected, now you can run it on multiple drawings. It’s always a good idea to create a backup before we start. Copy the drawing file before you run the script.

Running the Script Even Faster

Garry Nelson gave me an interesting information about AutoCAD Core Console, the accoreconsole.exe.

Using ScriptPro to do a batch process on multiple drawings is very helpful. But as we run it automatically, we don’t need to see the UI. And we don’t even need to see the file when the process run. You can use AutoCAD Core Console to run it much faster; it’s faster than I thought. It runs the process without an interface, without opening the file. It simply runs with the command line. 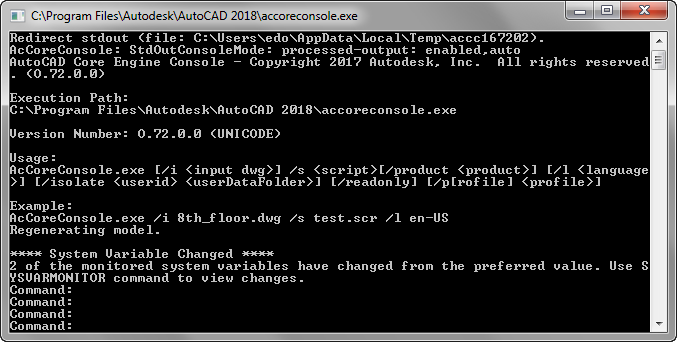 To use AutoCAD Core Console, you need to change the ScriptPro options. In the AutoCAD application to use, set the application to accoreconsole.exe (see the screenshot below). The file is in the same folder as AutoCAD. Usually in C:\Program Files\Autodesk\AutoCAD 201x\

If you want to read more about AutoCAD Core Console, visit Through the Interface blog: The AutoCAD 2013 Core Console.

Thank you, Garry, for the cool tip!

You can see how it works here

What else can you do with ScriptPro?

ScriptPro is very useful tool, and if you can use it right, it can look like black magic. With AutoCAD Core Console, it literally can save very significant time.

Now if you are already usingScriptPro, for what purposes did you use it? If you haven’t used it, do you have a plan how you are going to use it?

Hi Edwin, I can not found Lisp “the AutoLISP command to replace Esc key” . You can share it?

I understood your method, thanks for your sharing.

Thanks for sharing this information, I managed to get the script to work.

But when the block I’m updating has spaces in its filename I can’t get the script to work. How do you represent whitespace in the script?

Exactly like that. Double quote before and after. I did a lot of searching and many attempts to get it to work for me. Just for clarity, that’s 3 xes a space and 3 xes.

What if there say 50 drawings that are need to updated but not all have the same revision.

But does the script work if you run it without ScriptPro?

Hi, i have an issue with this script.
My block name is “X-KHUNG TEN” (it has space in its name) and the script didn’t work.

The script should work for all block names. Have you tried to redefine the block without the script? If it works, try the script without ScriptPro. It will be easier to find the problem if you try it step by step.

Great Article. Having some issues with my script. Trying to replace a block with the script. Command line asks – to redefine block, I click yes then, I receive an Invalid message.

Any ideas would be greatly received.

Hi Charlie,
Have you tried to run it without ScriptPro? What error message did you get? Can you copy and paste the error in the command line here?

Some very useful information here for pros and novices of CAD

The tutorial looks great. Would you happen to have same one but for a Mac user?

Hi Jay,
Unfortunately, ScriptPro is not available for AutoCAD for Mac. So no, you can’t use it on Mac OS.

Great tool tip. My script does not seem to run properly can you help me? Below is what happens when I run it.

It looks like the script works. I can see that the block is redefined.
Have you tested it in AutoCAD (without ScriptPro)? Does it work as expected? Have you checked the DWG file?

You may want to check if you add an empty line below QSAVE. Every new line represents enter in AutoCAD. If you don’t have an empty line after QSAVE, the last line will not be executed.
You can also add a space after QSAVE to execute the space key (which does the same as the Enter key).

New features roundup of AutoCAD interface for several latest releases. If you are a veteran user who use older version may find it useful.