You are here: Home / Archive / Revit ribbon is messed up after Revit 2014 installed

This is a common issue this week. This issue occurred if you installed Revit 2014 on your computer, but still have Revit 2012 or 2013 installed. After finished installing Revit 2014, you will find that Revit 2012 and 2013 ribbon are messed up. This issue is similar with Revit 2013 installation on Windows 8.

The problem is because Revit 2014 will install .NET Framework 4.5. as prerequisite. This is the one that cause above problem.

There are several hotfix and updates released by Autodesk to fix it. Follow the links below -based on your product- to download updates. Remember, Revit 2013 is the download link if you have Building Design Suite.

This is absolutely laughable. This is Autodesk's flagship MEP BIM software package, and beyond its dearth of features for MEP engineers (hangers/bracing, reliable hydraulic calculation, cut lengths, etc.), can't even perform basic functions. I appreciate the help; I had no idea what the issue was.

Yes, I had the same issue at the time of installting Revit 2014 for the first time.

I fixed with .NET Framework. 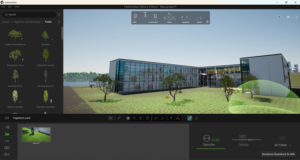 This real-time rendering tool is now available for Revit users